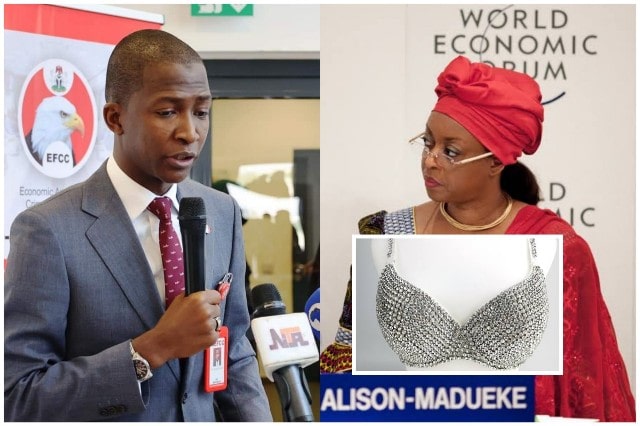 Abdulrasheed Bawa, chairman of the Economic and Financial Crimes Commission (EFCC), has denied that the anti-graft agency recovered a diamond bra worth $12.5 million when its operatives raided an apartment owned by former petroleum minister, Diezani Alison-Madueke.

Bawa refuted the reports when he appeared on TV Continental’s ‘Your View’ programme on Wednesday.

The EFCC chairman also debunked reports that the commission had auctioned properties seized from Alison-Madueke.

“The government has not sold a single property recovered (from Diezani),” said Bawa.

On if the diamond bra was seized from the ex-minister, Bawa said: “You (the media) have accused us several times of media trial but I think it is good to be fair to everybody at all times.

“Justice is a two-way thing, there was nothing like diamond bra. It is just the creation of the social media, I can tell you that for free because I’m the lead investigator.

“I’m not aware of it. If there is something like that, I should know because I led the search.”

Several newspapers, not Oriental Times, had reported that a bra called ‘Heavenly Stars’ and made by Victoria Secrets was among Alison-Madueke’s luxury possessions seized the EFCC.

The reports had claimed that it is one of the most expensive bras in the world with 1,200 pink Sapphires and diamond at the center of it.